Level Up with the Gamer Chronicles

Roll the dice, choose your avatar, strap on your virtual reality goggles, and get ready for the ride of your life.

In this title in the acclaimed Future Chronicles series of speculative fiction anthologies –  eleven authors break the rules in worlds of gaming adventure!

In Anthea’s story, Virtual Hero, a gamer caught in a deadly situation has to use his in-game skills to try and save the day.

A Doorway to Faerie Awaits 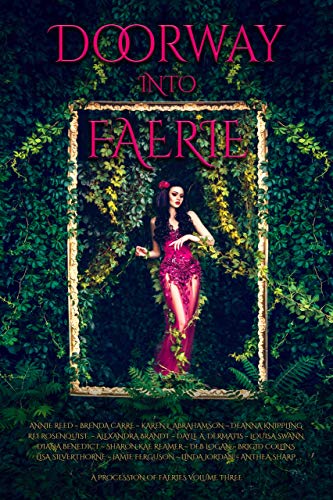 Step through the portal and enter the world of Faerie.

What if you followed a path through a city park, and found yourself in another land? What if the archway you just passed is really a portal to Faerie? What if the guardian of an opening into our world has perished, and left the doorway unattended?

Walk through the doorway and into sixteen different worlds of magic and enchantment.

Tales of Feyland and Faerie – .99 cents

Eight tales of Faerie magic and adventure, spanning the centuries from Ancient Ireland to a near-distant future. Visit the Bright Court, take a wild ride on a mystical steed, and hang out with Marny as she babysits a changeling – plus more enthralling stories full of fey mischief and enchantment.

BENEATH THE KNOWE
Can music overcome fey magic? When the chieftain’s infant son is stolen away by the fey folk of the Bright Court, Maeve Donnelly journeys beneath the faerie hill to save the child. Her only weapon is a simple pennywhistle, and the music running in her bard-gifted blood.

FAE HORSE
Accused as witch, Eileen must flee for her life, leaving her village and true love behind. With her pursuers closing in, she chances across a strange black horse – but does she dare to pay the price of escape?

BREAKING THE BROWNIE CODE
Feeyah MacGuire is not very good at being a Brownie—but when she breaks the sacred code of their kind she faces banishment… or worse.

MUSIC’S PRICE
Jeremy Cahill’s gifted cello playing calls the creatures of Faerie to him. As a boy, his Irish grandmother crafts him a charm to keep the fair folk at bay—but when it finally fails, Jeremy must face the terrifying power of Faerie…alone.

FEYLAND: THE FIRST ADVENTURE
Jennet Carter never thought hacking into her dad’s new epic-fantasy sim-game would be so exciting… or dangerous. Behind the interface, dark forces lie in wait, leading her toward a battle that will test her to her limits and cost her more than she ever imagined.

HOW TO BABYSIT A CHANGELING
When a mortal boy is exchanged for a hideous faerie creature, Marny Fanalua steps up to help her friends in their battle against the Dark Court. *NOTE * The events in this novella occur simultaneously with Feyland: The Twilight Kingdom. Reading the complete Feyland Trilogy first is recommended if you would like to avoid spoilers.

BREA’S TALE: ARRIVAL
When a faerie girl is sent on a mission to the mortal world, she must learn to navigate the intricacies of life among humans – but will she survive undetected? *NOTE* This story falls in between Spark and Royal in the Feyguard books, but it can be read as a stand-alone without spoiling anything.

FEYLAND TALES: Volume 1, features stories from eleven bestselling, award-winning authors, plus a brand-new Feyland story from me, The Bug in the Dark Court.

Ranging from the poignant to the gritty, the clever to the deeply thoughtful, these tales bring to life a near-future reality where immersive gaming enfolds the player, and dangerous magic is only a pixel away…

BUT WAIT… THERE’S MORE! Have you picked up your copy of Chronicle Worlds: Feyland yet? Scoop up both collections and get ready for a cornucopia of Feyland stories!  Grab the collection on AMAZON~

USA Today bestselling YA Urban Fantasy – The first three books in one epic digital bundle ~ Ready Player One with Faeries!

Faeries. Computer games. A boy from the wrong side of the tracks, and the girl he’s afraid to love…

Love litRPG, fairy tales, adventure, gaming, and a touch of romance? Dive into over 1k pages of fast-paced urban fantasy with this specially priced bundle of the first three books in the Feyland series!

“This is a great series that deserves more attention. The books are quick and exciting reads, and if you like stories based on fairy tales, or if you enjoyed both the portrayal of the fae in Mercy Thompson and October Daye and the virtual world of Ready Player One, you will love this series.” – Kate, Epic Chocolate Fantasy

“Ms. Sharp is a master storyteller… The Feyland books have found a prized place on my all-time favorite books list.” – Rebecca McKinnon, The Crooked Word

Dive into magic with The Sea King’s Daughter!

Now out! Just .99 cents at all retailers~

A poignant re-imagining of a classic fairy tale…

Deep beneath the Irish Sea lies a kingdom beyond mortal men’s imagining… Until one day a fisherman finds a beautiful maiden washed ashore. She cannot speak to him in any voice, though her yearning shines from her eyes. But with forces of land and sea arrayed between them, will they ever find their happy ending?

*Winner of the International Digital Awards for Best YA short story, The Sea King’s Daughter is a short tale of around 45 pages)

Spark free for a limited time!

Haven’t picked up SPARK yet? Now’s your chance! For one week only (until Sept. 4) the ebook is *FREE* at all digital retailers!

What if a high-tech computer game was a gateway to the treacherous Realm of Faerie?

Superstar gamer Spark Jaxley’s life might look easy, but she’s part of an elite few who guard a shocking secret; the Realm of Faerie exists, and its dark magic is desperate for a foothold in the mortal world.

Aran Cole hacks code and sells his gaming cheats on the black market. It’s barely a living, and one he’s not proud of. But when he turns his skills to unlocking the secrets behind Feyland–the most exciting and immersive game on the market–he discovers power and magic beyond his wildest dreams.

Spark’s mission is clear; pull Aran from the clutches of the fey folk and restore the balance between the worlds. But can she risk her life for someone who refuses to be rescued?

SPARK is also available in print. Buy a print version at Amazon, and get the e-book FREE through Amazon’s Matchbook program.