In the shadowed land of the Dark Elves, a hero must risk losing everything…

Prince Brannilon Luthinor and his mortal bride, Mara Geary, have returned to the Hawthorne Court, but despite winning the war against the Void, their own personal struggles are just beginning. Shards of the Void remain in the realm, and Bran must hunt them down, leaving Mara to face the poisonous intrigues of the court alone. She soon discovers that the fate of Elfhame is far more precarious than she first believed. While she grapples with mastering her own magic, and the depth of her feelings for her enigmatic husband, Bran chases down the enemy – but his foe has grown more cunning than he ever imagined.

As treacherous schemes and dire enemies close in around the couple, they must learn to trust the power of their magic and their hearts… before both their worlds are lost forever.

Available on all retailers!

What if a high-tech game opened a gateway to the treacherous Realm of Faerie?

Feyland is the most immersive sim-game ever designed, and Jennet Carter is the first to play the prototype. But she doesn’t suspect the virtual world is close enough to touch – or that she’ll be battling for her life against the Dark Queen of the faeries.

Tam Linn is the perfect hero – in-game. Too bad the rest of his life is seriously flawed. The last thing he needs is rich-girl Jennet prying into his secrets, insisting he’s the only one who can help her.

Together, Jennet and Tam enter the Dark Realm of Feyland, only to discover that the entire human world is in danger. Pushed to the limit of their abilities, they must defeat the Dark Queen…before it’s too late.

Scoop up these goodies and settle down for some fabulous reading…

Once Upon A Ghost – .99 cents until November 1 on most retailers!

Twenty dark and ghostly faerie tale retellings from the NYT, USA Today and internationally bestselling authors in the award-winning Once Upon Anthologies series! Push open the creaky cellar door and prepare for chilling re-imaginings of Sleeping Beauty, Goldilocks, Rapunzel, and Bloody Mary. Or breathe a sigh of relief with brighter twists on The Little Match Girl, Hansel & Gretel, and The Bremen Town Musicians.

But beware! Blood and revenge, creepy haunted houses, and evil magic lurk within the pages. Are you brave enough to enter?

PASSAGE OUT is here, and FREE on all retailers!

Available for preorder at:

Two sisters. One enchanted forest. And a hidden destiny that could doom them both…

I didn’t want to come live in the castle beside the Darkwood, and I especially didn’t want to become enemies with my stepsister Neeve. But how could I help it? She has magic, while I’m an ordinary girl. She’s the heir to the throne, while I’m an annoying afterthought since my mother married the king. And Neeve has the ability to master her emotions while I’m a re-haired disaster.

She also has Thorne, the handsome guardian of the forest, who tutors her in the powers that are her heritage. Even though I know he could never be mine, I can’t keep my heart from dreaming of the impossible.

But everything changes, the day I uncover the secrets the castle has been hiding…

A fantasy fairy-tale weaving elements of Snow White & Rose Red with romance, magic, and dangerous secrets that will destroy a kingdom.

For the first time EVER, the entire Feyland series (over 2k pages) is on sale. Discover the magic and adventure of the USA Today bestselling series, when a high-tech computer game opens a gateway to the treacherous Realm of Faerie…

Audiobook aficionado? The omnibus is in audio too – 54 hours of fabulous narration from Amy Landon available at Audible, Amazon, & Apple.

Grab your copy today – the sale ends at midnight August 30 and will not be repeated! 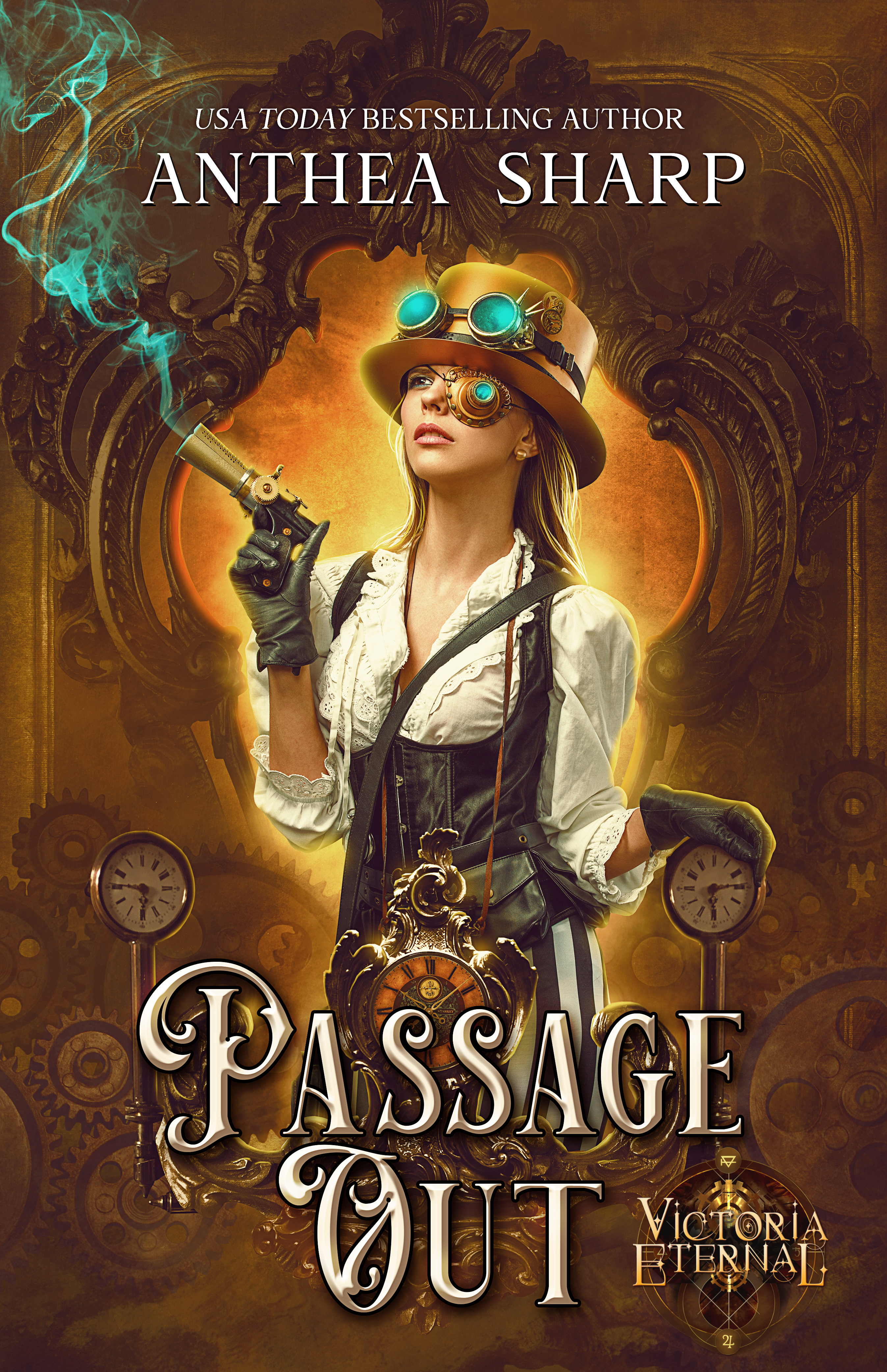 PASSAGE OUT is here, and FREE on (almost) all retailers!

Ready for Fae and Dark Elves?

Into the Darkwood – available currently at AMAZON.

Prophecy demands she marry a Dark Elf prince, but Mara Geary refuses to meekly accept her fate. Danger, adventure, and romance await in the magical forest of the Darkwood, where an intrepid heroine and a warrior prince must learn to trust one another before their kingdom is devoured by an ancient enemy…

Of Fables & Fae, a limited-time anthology of faerie stories. Includes my Pied Piper retelling Faerie Song. Scoop up your copy at AMAZON.

The Fae can be tricky creatures. Some manipulate humans while others avoid them. Will you be fooled by the glamour and magic? With more than 700 pages of captivating fiction, you’ll be enchanted by fairy queens, surrounded by pixies, ride alongside creatures to lands unknown, and fear whether each new Fae you meet is friend – or foe…

Ready for a Change?

Find hope in difficult times in these five modern-set speculative stories filled with action, whimsy and a touch of the fantastical. This short story collection is approximately 150 pages.

NO FREE LUNCH – The flip of a coin can make all the difference in the world.

VIRTUAL HERO – When reality gets dangerous, a hardcore gamer must save the day.

GROUNDS FOR DISMISSAL – A new barista gets a hard lesson in quality control.

REAL CHALLENGE – Sometimes, when you lose, you win.

ICE IN D MINOR – Hope for the future can be found in the most unlikely places.

Star Compass in the spotlight~

I’m delighted to announce that Star Compass – available in print, ebook, and audio – is in the Self Publishing Blog Off this year, along with, oh, 299 other awesome books. Head over to Mark Lawrence’s website to check them out! Plus, narrator Danielle Cohen gets well-deserved praise in this review from AudioFile for her audiobook narration: “Danielle Cohen delivers a warm and engaging performance of a Victorian romance that reaches for the steampunk stars…a solid narration that gently matches the pitch and swell of a well-told romance.”

Derek Byrne polices the grimy streets around the Southampton Spaceport, trying to keep the gangs in line and the gutters clear of riffraff. When his path crosses Diana’s, he sees beyond her masculine disguise and catches a glimpse of the remarkable young lady hiding beneath the rags and bravado.

But Derek has his own dark secrets, and when Diana averts a near-disaster at the Spaceport, fate flings them along a trajectory that will lead them to adventure, romance – and peril beyond their wildest imaginings.

PRINT available from B&N  and AMAZON

“A fine and engaging rendering of Steampunk tropes…The mix of old-fashioned slum-level criminality and futuristic space technology works well, and Diana is very appealing as she takes her remarkable journey from up, to down, to up again, despite the struggles she faces staying on top. Sharp offers crisp, lucid, straightforward writing that keeps the reader turning pages.” – Publisher’s Weekly, via PW BookLife 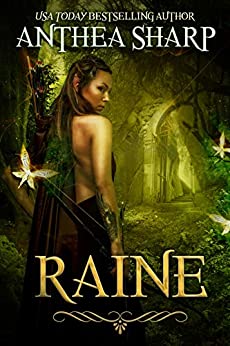 Now available at AMAZON! Book 3 in the Darkwood Chronicles series, filled with adventure, magic, and romance, with a solid helping of fairytales on the side~

In the shadowed land of Elfhame the Hawthorne Throne is in grave peril, and the heir, Prince Brannon Luthinor, is nowhere to be found. He and his human wife have crossed between the worlds in pursuit of the Dark Elves’ ancient enemy. Only one person has the courage to follow: his sister Anneth.

But the mortal world is far more complex than Anneth expected. Desperate to find her brother and his wife, she instead stumbles into danger of her own. Her only hope of protecting those she loves is to give herself up to the enemy, and risk sacrificing everything for the sake of a mortal prince. 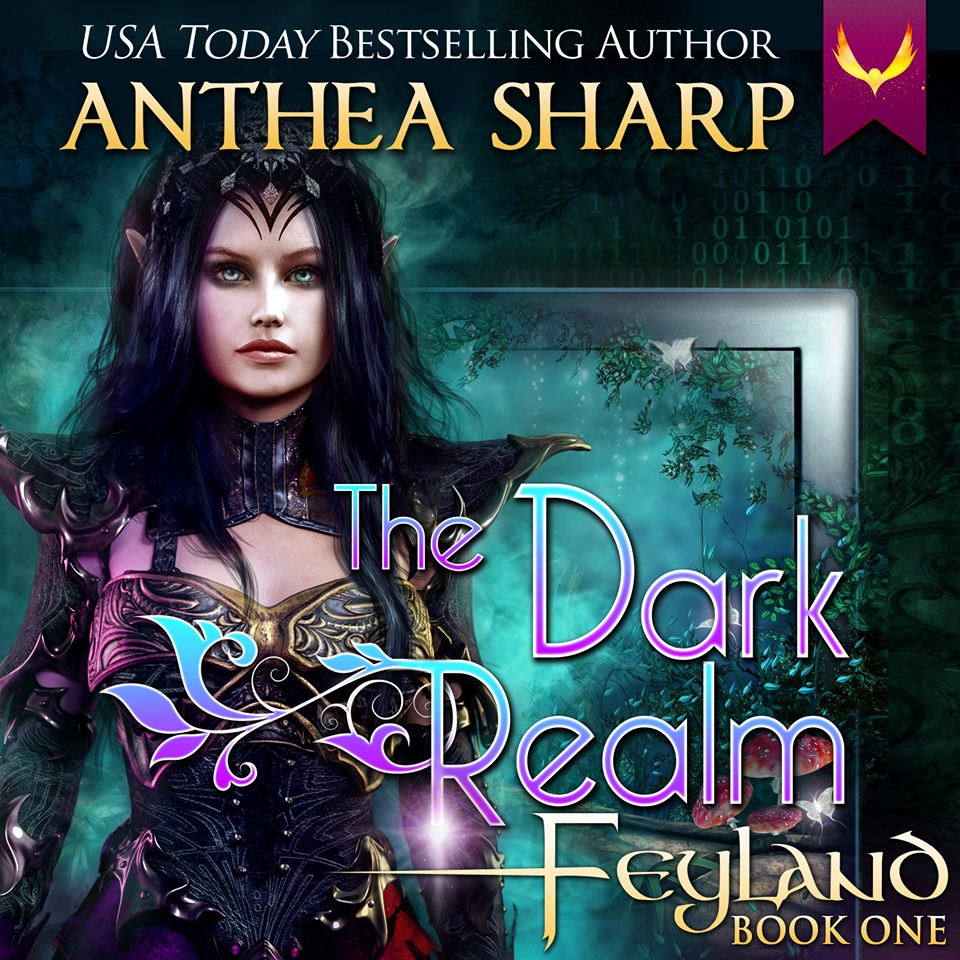 Narrated by the fabulous actress Amy Landon, the Feyland series is currently in audio production from Aethon Books – and THE DARK REALM releases in audiobook today! Plus, if you already own the ebook copy of The Dark Realm, you can buy the audio version on Amazon for just $7.49 – so grab your copy now and get ready for a fabulous escape from reality… 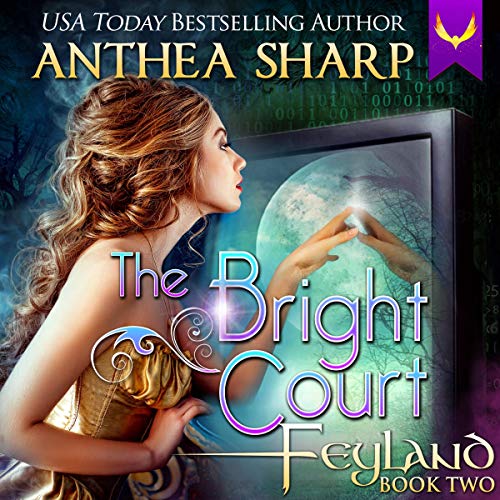 The adventure continues with THE BRIGHT COURT! Plus, praise for fabulous narrator Amy Landon:

“Super fun – I’ve found a new narrator through this series. Absolutely picking up more of her stuff. Dont’ get me wrong, the author is great too… but the narrator makes this thing what it is.” – Willis Burns on Audible

The third book is now out! Grab your copy of THE TWILIGHT KINGDOM!

More faerie magic, thrilling gaming, and the introduction of the beta-team as the adventures in Feyland continue!

The fourth book is now out! Grab your copy of SPARK!

More faerie magic, thrilling gaming, and Spark’s challenges in-game and out as the adventures in Feyland continue!