“Ready Player One with Faeries… Super cool and would make for an awesome movie.” – Kathryn M, Amazon review

What if a high-tech computer game was a gateway to the treacherous Realm of Faerie?

Discover the USA Today bestselling, award-winning world of FEYLAND – a science-fantasy series full of adventure and magic, immersive gaming and faerie lore, with a touch of romance! Including six full-length novels, three novellas, and some short stories, there’s plenty of adventure ahead. *For fans of cyberpunk, MMOs, fairy tales, magic, quests, battles, romance, friendship, ancient ballads, and futuristic virtual reality* Over 150k copies of the original trilogy have been sold worldwide. Over 1 million reads on Wattpad.

Where to start? With the FREE prequel novella, Feyland: The First Adventure, of course!

The first five Feyland titles are collected in the e-book set FEYLAND: The Complete Trilogy, and the second five titles are included in the FEYGUARD: Books 1-3 boxed set. Assorted short faerie tales, including the Feyland tales, are in the collection Tales of Feyland & Faerie. 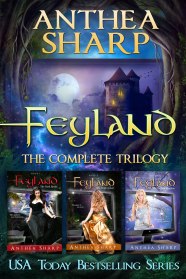 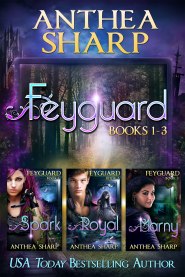 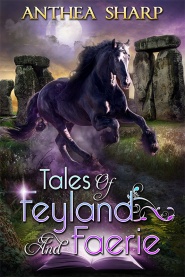 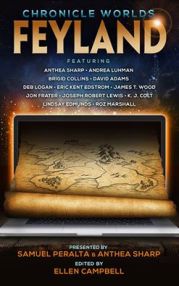 This groundbreaking new collection from editor Samuel Peralta, in collaboration with author Anthea Sharp, features twelve brand-new tales from top authors in the SFF genre, all set within the world of Feyland.

Whether you want to immerse yourself in the magical Realm of Faerie or dive into a bout of serious gaming,CHRONICLE WORLDS: FEYLAND will take you there. Are you ready for the adventure? 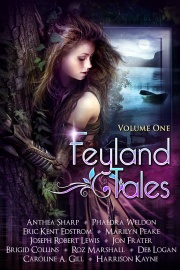 Feyland Tales features stories from eleven bestselling, award-winning authors, plus a brand-new Feyland story from me, The Bug in the Dark Court.

Ranging from the poignant to the gritty, the clever to the deeply thoughtful, these tales bring to life a near-future reality where immersive gaming enfolds the player, and dangerous magic is only a pixel away…

In addition to selling over 150k copies worldwide and hitting the USA Today bestseller list twice, the books in the Feyland series have garnered the following awards:

THE DARK REALM
Indie Book of the Day Award
1.1 million reads on Wattpad