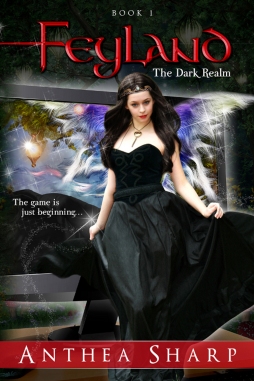 Feyland is the most immersive computer game ever designed, and Jennet Carter is the first to play the prototype. But she doesn’t suspect the virtual world is close enough to touch — or that she’ll be battling for her life against the Dark Queen of the faeries.

TURNS REAL…
Tam Linn is the perfect hero — in-game. Too bad the rest of his life is seriously flawed. The last thing he needs is rich-girl Jennet prying into his secrets, insisting he’s the only one who can help her.

WINNING IS EVERYTHING…
Together, Jennet and Tam enter the Dark Realm of Feyland, only to discover that the entire human world is in danger. Pushed to the limit of their abilities, they must defeat the Dark Queen… before it’s too late.

USA Today bestselling author of romance and fantasy
View all posts by Anthea Sharp →
This entry was posted in Faerie Tales, Free, Gamers, Giveaways and tagged free ebook, ya fantasy. Bookmark the permalink.